The “Dia do Fogo” or ‘Day of Fires’ in August 2019 put the Brazilian Amazon in the headlines around the world and caused international alarm. The fires that raged contributed to the deforestation of up to 1.2 million hectares in 2019 alone - more than 60% of that being in the Amazon. Since that day, deforestation alerts in the Amazon have grown 34.5%, pushing this eco-system to a climate-critical tipping point. The Fair Finance International (FFI) network in the Netherlands, Germany and Norway with strong cooperation from the team in Brazil carried out three studies analyzing financial institutions’ investments in companies with a high risk of involvement in deforestation in the region.  By bringing together this data the network has shown that billions in investments flowed from European financial institutions to these companies – directly contributing to the destruction of this climate-critical environment.

The massive increase in deforestation in the Amazon, the Cerrado, the Caatinga and the Pantanal has raised questions as to why this destruction continues.  Studies show that 90% of the primary vegetation lost in Brazil in the last 35 years has been due to agricultural activities. Land is cleared of forest in order to raise beef cattle, and primarily soy, cotton, sugarcane and maize crops. A significant proportion of what is produced is exported to European markets for food products and animal feed.

Whilst a large number of agricultural and livestock producers are in compliance with environmental and labour legislation, the predominant agribusiness model is to expand areas of ​​pasture and plantation at the expense of the forest. Valuable trees are felled and fire is used to clear the land for cultivation and pasture. Agribusiness is an important part of Brazil’s economy - according to data from Cepea (Center for Advanced Studies in Applied Economics) of Esalq / USP, it contributed 21.4% of Brazilian GDP in the past year.

Shortly after Dia do Fogo, 230 investment funds that manage more than R$ 65 trillion (Brazilian Real) asked Brazil to protect the Amazon. In May 2020, Vale and Eletrobrás were excluded from investments by the Norwegian sovereign wealth fund, and in June 2020, investors totaling more than R$ 3.7 trillion in managed assets threatened to withdraw investments from Brazil if urgent measures were not taken. Financial institutions said they "recognize the crucial role that tropical forests play in mitigating climate change, protecting biodiversity and guarantee ecosystem services."

In July 2020, meat giant JBS was excluded from the investment portfolio of the European asset manager Nordea, and in August 2020, HSBC declared that JBS has no "vision, action plan, deadline, technology or solution" to avoid indirect suppliers that deforest.

These reactions show increased concern for what is happening, but also indicate the scale of the links between the financial sector and deforestation in Brazil's agricultural supply chains. Therefore Fair Finance Germany, the Netherlands, and Norway looked past the rhetoric, and conducted three large studies to analyse how much financial institutions in their respective countries are investing in companies heavily linked to deforestation in the Brazilian Amazon and Cerrado. The reports collectively identified more than US $ 11 billion being pumped into 26 leading Brazilian agribusiness and retail companies. Investments were identified from 31 financial institutions in the three countries, including insurance companies, banks, asset managers and pension funds. When Chinese and European companies are added – those that do not necessarily operate in Brazil but purchase Brazilian agribusiness products like soy and feed - the number increases from 31 to 59 and the amount invested or loaned rises to almost US $ 21 billion. 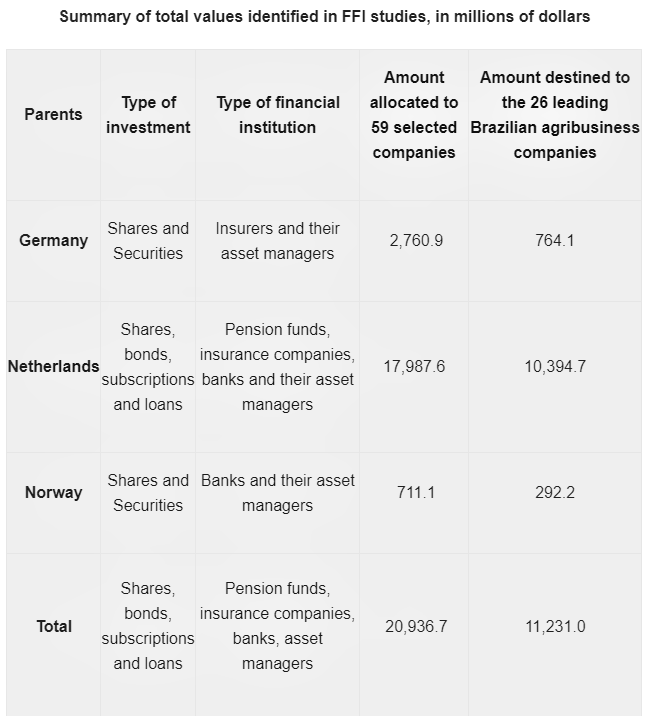 The Dutch report identified nearly $ 3.2 billion in investments in stocks and bonds from 59 companies. Almost half of this amount went to leading Brazilian agribusiness companies, an amount of US $ 1.4 billion. In addition to the investment value, these companies operating in the Brazilian market received an additional US $ 7.8 billion in loans that are still current and another US $ 1.1 billion in share subscription between 2015 and 2020. Accounting for investments, subscriptions and loans, 19 financial institutions operating in the Netherlands have allocated almost US $ 10.4 billion to the 26 companies that lead agribusiness and the distribution of their by-products in Brazil.

In Germany, investments by the largest active insurers in the country were examined (see infographic below), as well as the asset managers they hire to manage part of their funds. It was found that US $ 764.1 million was directed to companies operating in agribusiness. The studies also aimed to identify the degree of action that the financial institutions of each country are taking to avoid involvement in deforestation and its related effects and the engagement they have with companies known to be involved - directly or indirectly - in converting forests into pasture and plantation, or in the sale of the products of these companies to the foreign market (export) or consumer market (retail).

Time to step up

In the Netherlands, following the report several of the surveyed financial institutions pledged to strengthen social and environmental engagements and analyses in accordance with the report's recommendations, in addition to improving their policies.

But perhaps unsurprisingly Fair Finance Germany, the Netherlands and Norway conclude that most of the financial institutions in their respective countries have only shallow commitments in place to prevent financing deforestation, with evidence of poor accountability measures and a low level of engagement with agribusiness companies.

The "Day of Fire" in the Amazon highlighted the role of the international financial sector in fuelling the destruction of the Amazon and Cerrado. Financial institutions must take responsibility for their investments, and define robust policies for the analysis, monitoring and engagement of all actors involved in agribusiness production, supply and export chains. Unless Financial Institutions urgently address their role in funding deforestation, the Amazon and the battle against climate breakdown will go up in smoke.