Score improvement across the board: TMB-SCB-KBank top charts 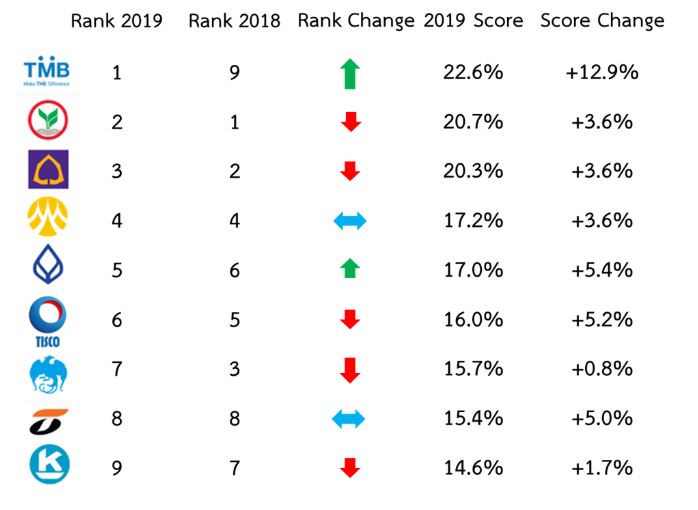 The 2019 assessments reveal that every bank’s scores improved from 2018. Average score rose 5.1% to 21.31 points from the total of 120 points. Top 5 scorers are TMB Bank (22.6%), Kasikornbank (20.7%), Siam Commercial Bank (20.3%), Bank of Ayudhya (17.2%) and Bangkok Bank (17%). Two banks improved their rank from 2018: TMB rose dramatically from 9th place in 2018 to the top, and Bangkok Bank improved one position from 6th to 5th. Four banks whose rank declined relative to peers are Kasikornbank, TISCO, Krung Thai Bank, and Kiatnakin Bank. Three banks -- namely Siam Commercial Bank, Bank of Ayudhya, and Thanachart Bank -- retain their ranks relative to peers from 2018. 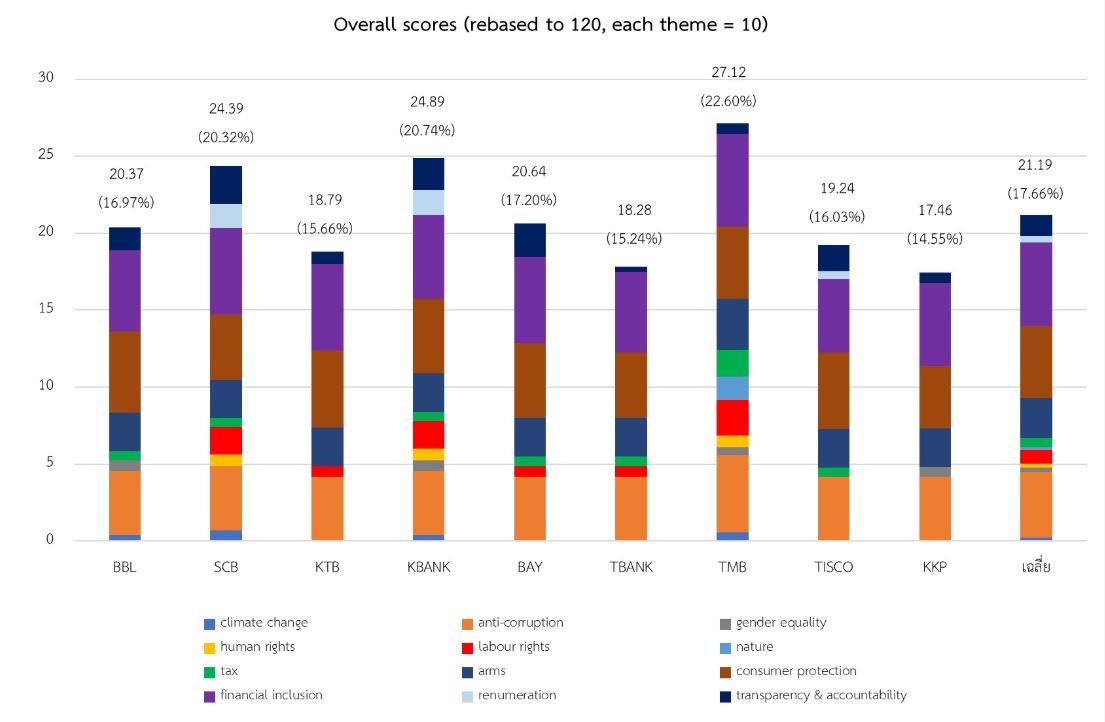 Relatively low scores in these themes are worrisome, since they are all important issues that are becoming increasingly urgent in Thailand and the world due to more keenly felt impact. Overall, 6 Thai banks have yet to publicly announce clear credit policies including ESG (environmental, social, and governance) risk management.  These policies are equivalent to a crucial promise to consumers that banks will not lend to businesses that cause serious harm to society and the environment.

Kasikornbank, TMB Bank, and Siam Commercial Bank are the only 3 banks that publicly announce at least some semblance of credit policies, although sectoral policies remain scant.

Financial inclusion is a theme in which Thai banks scored quite well for the second year in a row. No bank scored less than 20% in this theme. This is partly a result of every bank’s proactive digital banking strategy, which helps push the boundary of financial inclusion. However, it remains to be seen whether some disadvantaged groups are excluded from this rush to digital banking at the expense of traditional branch-based banking.

Gender equality and remuneration are two themes in which Thai banks still score relatively low - 2.8% and 4.1% respectively. This reflects the fact that most banks still do not disclose clear policies that are meant to improve gender equality in the institution and prevent sexual harassment of consumers. On the remuneration front, most banks do not disclose policies that show they consider non-financial criteria -- such as consumer satisfaction and ESG performance --  in the compensation of employees, top executives and bank directors.

Sarinee Achavanuntakul, Head of Fair Finance Thailand explains “the fact that every bank’s score increased from 2018, the first year we did this assessment, shows that Thai banks are quite keen to design and disclose more policies that are in line with fair finance and sustainable banking in different dimensions. Our research team is heartened by the openness and pro-activeness of most banks, as seen in the fact that we have received cooperation from most banks during the draft hearing process, and several banks even disclosed more policies on their websites during the process, which led to higher eventual scores.”