ABP, Allianz and ING financing the climate crisis: 88% of investments and 69% of loans to the energy sector going to fossil fuels

Five years after the Paris Climate Agreement, Dutch banks, insurers and pension funds are still investing much more money in fossil fuels than in sustainable energy. At the end of 2020, 88% (34.3 billion euros) of their investments in the energy sector were in coal, oil and gas. With regard to lending and underwriting services, between 2018 and 2020 69% (9.1 billion euros) went to fossil fuels. These findings come from new research published by the Fair Finance Guide Netherlands. The main financiers of fossil fuels are ING, insurers Allianz and Aegon and pension funds ABP and PFZW. The Fair Finance Guide Netherlands is calling for a climate obligation that ensures that financial institutions stop financing fossil energy. 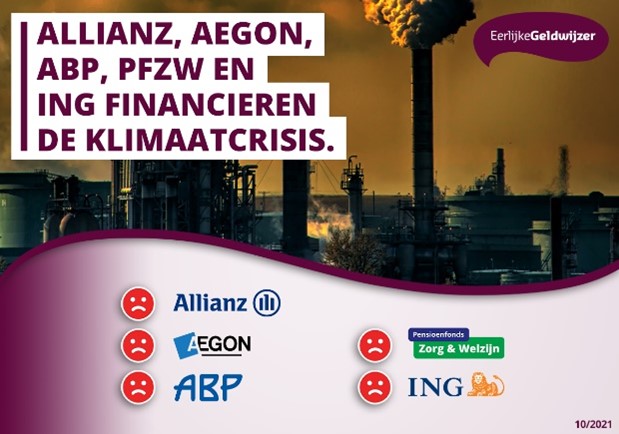 No carefree old age
“While millions of Dutch people entrust their money to banks, insurers and pension funds, most of these financial institutions continue to fuel the climate crisis with their investments in coal, oil and gas.” says Donald Pols, director of Milieudefensie (Friends of the Earth Netherlands) and spokesperson for the Fair Finance Guide Netherlands. “Instead of in a carefree old age, they are investing in deadly floods, heat waves and forest fires. We can still prevent dangerous climate change, but only if all pension funds, insurers and banks take their responsibility and stop financing fossil fuels.”

On a collision course with Paris
The analysis by the Fair Finance Guide Netherlands shows that the energy investments of most financial institutions are on a collision course with the 1.5-degree goal of the Paris Climate Agreement. The latest report from the UN Climate Panel is crystal clear: unless there are immediate, rapid and large-scale reductions in greenhouse gas emissions, that goal is out of reach. At the end of 2020, 88% of the financial institutions' total of 39.1 billion euros in energy investments were in fossil fuels. This is seven times more than is being invested in renewable energy. Furthermore, four Dutch banks provided 13.1 billion euros in loans to energy companies between 2018 and 2020. 69% of this went to fossil energy, versus 31% to renewable energy.

Fossil financiers
With 9.1 billion euros, ING was the largest Dutch creditor to the energy sector in the past three years. 75% of that credit went to fossil fuels. ABN Amro hardly did better with 71%. At Rabobank, the sharp increase in investments in sustainable energy is particularly striking, from 63% in 2018 to 88% in 2020. At the end of 2020, pension funds ABP, PFZW and PMT had respectively 86%, 83% and 95% of their energy investments in fossil fuels, while insurers Allianz, Aegon and Nationale Nederlanden were investing 90%, 93% and 66% respectively in dirty fuels. Speaking on the issue Donald Pols said “We are in the middle of a climate crisis, so it is all hands on deck now in order to keep the earth habitable. Investing in fossil fuels is no longer an option. Triodos and Volksbank/ASN show that financial institutions can opt for 100% renewable energy and PME has shown that it is possible to get out of fossil fuels without compromising on building a safe and good pension.”

Climate obligation for companies
This research proves that most banks, insurers and pension funds are changing their financing practices too slowly and too little to prevent dangerous climate change. In September, the Fair Finance Guide Netherlands published a new study that shows the climate ambitions and plans of many financial institutions are substandard, despite voluntary mutual agreements by the financial sector to contribute to the Paris Climate Agreement. The Fair Finance Guide Netherlands coalition therefore calls on the government to introduce a climate obligation for financial institutions. This is a legal obligation to align all loans and investments with the 1.5-degree target.

The report can be downloaded here