Climate demand to Financial Sector to align with 1.5 degrees

Following the recent Shell judgment in the Dutch courts to align to 1.5 degrees, an open letter to banks, pension funds and insurers calls on them to also take action. 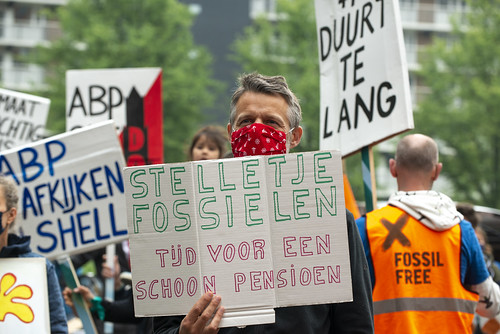 The Shell verdict has real consequences for the financiers of major climate polluters, says Oxfam Novib, Fair Finance Guide, Friends of the Earth (Milieudefensie), Greenpeace and others, in an open letter to the largest banks, pension funds and insurers in the Netherlands.

Last May, the Court of The Hague ruled that oil company Shell must drastically reduce its CO2 emissions, because Shell is contributing to dangerous climate change and thereby endangering human rights. Large banks, pension funds and insurers hold similar responsibility for the CO2 emissions arising from their loans and investments, and this letter demands that the financial sector take far-reaching measures to address this, now.

“Financial institutions must take responsibility and stop financing coal, oil and gas. It is only a matter of time before citizens and civil society organizations call more companies to account through the courts. That is risky for financiers of major polluters,” says Faiza Oulahsen, Head of Climate and Energy at Greenpeace.

Walking the talk on climate

Organizations committed to the environment and human rights observe that there are words and pledges on tackling the climate crisis from banks, pension funds and insurers in the Netherlands, but too little action.

“As heat records are broken, ice caps are melting, forests are burning, and more and more people are migrating because of dangerous climate change, financial institutions continue to finance fossil fuels. Last year ING financed around 6.5 billion dollars in fossil energy companies and Pension fund ABP actually doubled its stake in Shell. This is precisely what is driving the climate crisis. The failure to take any responsibility," says Peter Ras of the Fair Finance Guide Netherlands.

A demand to largest financial institutions

The group calls on the largest financial institutions in the Netherlands to take decisive climate action in the lead up to COP26:

The letter was sent to the CEOs and chairmen of the banks ABN AMRO, ING and Rabobank, pension funds ABP and PFZW, insurers NN Group (Nationale Nederlanden), Achmea and Aegon and credit insurer Atradius.

The letter (in Dutch) was signed by Greenpeace Netherlands, Oxfam Novib, Fair Money Guide, BankTrack, Milieudefensie, Urgenda, Natuur & Milieu, Both ENDS, Fossielvrij NL, Oil Change International, Hivos, Groen Pensioen and SOMO. The organizations request a response from the financial institutions before the climate summit in Glasgow at the end of October.

You can share this via Linked In or Twitter, and read more about this Dutch campaign here.