Netherlands' Pension funds, insurers and banks not yet Paris-proof

The climate plans of the Dutch financial sector are totally insufficient to achieve the goals of the Paris Climate Agreement, and they do not reflect the seriousness and urgency of the climate crisis.

According to new research by the Fair Finance Guide Netherlands, major pension funds such as ABP and PFZW and insurers such as Aegon, Achmea and Nationale Nederlanden have not set specific targets for phasing out all their investments in fossil fuels. Major banks such as Rabobank and ABN Amro do not have a policy of aligning all their loans and investments with the goal of limiting global warming to 1.5°C.

Fair Finance Guide Netherlands is calling for pension funds, insurers and banks to operate fully in line with the Paris Climate Agreement and for the introduction of a legal climate obligation for financial institutions. "The latest report from the UN climate panel is unambiguous: it is code red for humanity," says Donald Pols, director of Milieudefensie and spokesperson for the Fair Finance Guide Netherlands. “We can prevent dangerous climate change, but only if everyone participates, including pension funds, insurers and banks. Our case study shows that the voluntary approach taken by the financial sector is not working.”

The climate policies of 27 financial institutions active in the Netherlands has been assessed by research agency Profundo on behalf of the Fair Finance Guide Netherlands. The results are alarming. Only one out of three financial institutions has an explicit goal to align loans and investments with scenarios that limit global temperature rise to 1.5. Only one out of nine has completely ceased/phased out fuel financing.

The research scores the financial institutions assessed, with De Volksbank (score 9), Triodos, Bunq and insurer Athora Nederland (score 8) proving that good climate policy is possible. However many underperformed such as pension giants ABP (score 5) and PFZW (score 4), insurers Aegon (score 3), NN and Achmea (score 5) and the large banks Rabobank (score 5) and ABN Amro (score 5). Indeed pension funds and insurers perform worse than the banks. While the catering pension fund (horecapensioenfonds) and the pension fund for the metal electronics (PME) recently decided to get their investments out of coal, oil and gas, the pension giants ABP and PFZW are still pumping billions into the fossil fuel industry.

To prevent runaway climate change, the billion-dollar flow of funds to the fossil fuel industry must be rapidly diverted to climate solutions. That is one of the main goals of the Paris Climate Agreement.

In recent years, Dutch financial institutions have made mutual voluntary agreements to reduce their contribution to the climate crisis. Some institutions are actively doing this, but many continue to postpone the necessary change of course, according to the research of the Fair Finance Guide Netherlands. The Finance Guide Netherlands coalition calls on the government to introduce a climate obligation for financial institutions. This means that pension funds, insurers and banks are legally obliged to implement policies to make their portfolios climate-proof and to limit global warming to 1.5°C.

This report of the Fair Finance Guide Netherlands is part of a two-part study. The second will compare the financing of fossil and renewable energy by Dutch financial institutions and will be published in October. 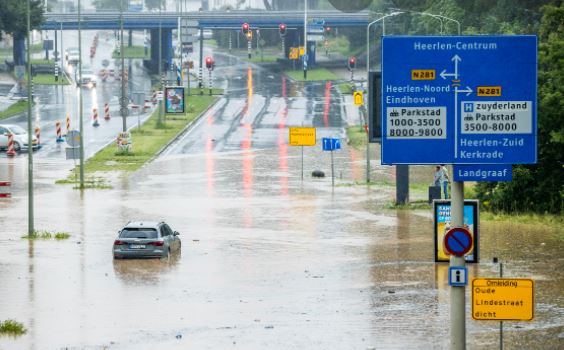