Between January 2018 and May 2021, 672 European financial institutions, including banks, asset managers, insurance companies, and pension funds, had financial relationships with 50 businesses that are actively involved with Israeli settlements, for a total of US$ 255 million in crediting and investments.

New research by a cross-regional coalition of 23 Palestinian and European organisations shows that, between 2018 and May 2021, 672 European financial institutions, including banks, asset managers, insurance companies, and pension funds, had financial relationships with 50 businesses that are actively involved with Israeli settlements. These financial institutions can be directly linked to violations committed in the illegal Israeli settlements in the OPT through the provision of such loans, underwriting services and investments to businesses involved in the settlement enterprise. European FIs should be aware of the risks of being linked to the settlement enterprise, and of their responsibilities under international law, the UN Guiding Principles on Business and Human Rights (UNGPs) and the OECD Guidelines for Multinational Enterprises (OECD Guidelines).

The “Don’t Buy into Occupation” (DBIO) coalition is a joint project between 26 Palestinian, regional and European organisations based in Belgium, France, Ireland, the Netherlands, Norway, Spain and the United Kingdom. The coalition - which Fair Finance Belgium is a part of - aims to investigate and highlight the financial relationships between business enterprises involved in the illegal Israeli settlement enterprise in the Occupied Palestinian Territory (OPT) and European Financial Institutions (FIs).

In order to create such awareness, this report has identified a total number of 130 businesses that are involved in activities linked to Israel’s illegal settlement enterprise in the OPT. This list of businesses, which builds upon the existing UN database of businesses involved in activities linked to Israeli settlements in the OPT (UN Database), together with the UNGPs, serves as the basis for further research into the financial relationships between business enterprises and European FI's.

Israeli settlements, their maintenance and expansion are illegal under international law and constitute acts which incur individual criminal liability as war crimes and crimes against humanity under the Rome Statute of the International Criminal Court (ICC). International humanitarian law (IHL), as per the Fourth Geneva Convention, prohibits the Occupying Power from the individual or mass forcible transfer and deportations of protected persons, as well as from transferring parts of its own civilian population into the territory it occupies. In addition, the confiscation of land to build or expand settlements in occupied territory is also prohibited, whereas the extensive destruction and appropriation of property for the benefit of settlements violates a number of provisions of IHL, as found in the Hague Regulations of 1907, the Fourth Geneva Convention, and in customary IHL.

In addition, Israeli settlements have resulted in a myriad of human rights violations against the protected Palestinian population, while fragmenting the West Bank and isolating it from Jerusalem, and rendering sustainable and independent social and economic development for Palestinians in the Occupied Palestinian Territory (OPT) impossible to achieve.

As evidenced by legal experts and human rights organisations, settlements are also a key component of Israel’s apartheid regime over the Palestinian people, in which Israel administers the territory under two entirely separate legal systems and sets of institutions: a civil administration for Israeli-Jewish communities living in illegal settlements on the one hand, and a military administration for the occupied Palestinian population living in Palestinian towns and villages on the other.

Israeli, European and international business enterprises operating with or providing services to Israeli settlements, play a critical role in facilitating the functioning and growth of settlements. Considering the illegality of settlements, the associated wide range of international humanitarian law violations, severe adverse human rights impacts on the Palestinian population and the obstruction of the development of the Palestinian economy, private actors have a responsibility to ensure that they are not involved in violations of international law and are not complicit in international crimes, and address any adverse human rights impacts arising from their activities and business relationships. However, despite its illegal nature, European financial institutions continue to invest billions into the Israeli settlement enterprise.

The Top 10 creditors (loans and underwritings) alone provided US$ 77.81 billion to businesses that are actively involved with Israeli settlements: 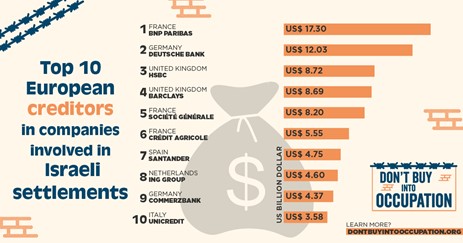 The Top 10 investors (shareholdings and bondholdings) alone invested US$ 67.22 billion in businesses that are actively involved with Israeli settlements: 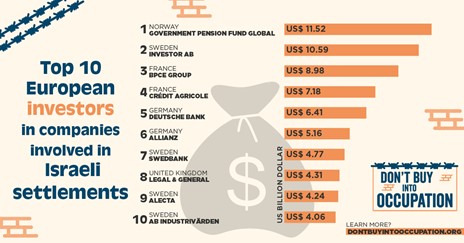 Further details on these connections, as well as three in-depth case studies, can be found in the full report by the “Don’t Buy Into Occupation” coalition.

Based on the analysis and findings presented, the relevant applicable international law framework, and the jurisprudence of various international instruments, the report provides a set of recommendations for financial institutions, business enterprises, European governments and institutions, and local authorities across Europe.

A full list of recommendations can be found in the report, on pages 98-100.