Opinion: Major oil and gas sector players race out of Russia – Total and Chevron stick around

In this blog piece Kleopatra Partalidou - Project Coordinator of Fair Finance Germany - looks at how the oil and gas industry have responded to the invasion on Ukraine and examines the financial relationships of German financial institutions with those still engaging in Russia.

During the last few days, the world has witnessed a race within the western oil and gas sector to withdraw from their Russian assets, as a response to Putin’s invasion of Ukraine. This move was greeted with applause; however, many believe it came too late. After all, western oil and gas firms have been providing the Russian economy with capital for years, ignoring red flags and sticking to high-risk assets. Not even the illegal annexation of Crimea in 2014 and subsequent sanctions applied by the U.S. and the EU [1] were able to trigger such a response. It would not be an exaggeration to say, that this continuation of “business as usual” with the Russian oil industry has helped finance the war on Ukraine, which has already cost thousands of civilian casualties.

Among the first oil firms to announce abandoning Russia after being invested in the country for decades were BP, its top competitor Shell, the American giant ExxonMobil and Norway’s Equinor. The British multinational BP PLC (BP) has recently announced its intention to cut all ties with Russia by divesting its 19.75% shareholding in Russian oil firm Rosneft, a stake that corresponds to one third of BP’s oil and gas production, as a reaction to Russia’s invasion in Ukraine [2][3]. The majority owner of Rosneft is the Russian government through its holding company Rosneftegaz [4]. However, further details about when and how this will happen are yet to be announced. This is a positive development which sets a strong example for more western companies from, but not limited to, the oil and gas sector to follow. Rosneft itself, on the other hand, has been involved in a multitude of controversies in the past, including a disturbingly high number of oil spills each year [5] and a serious violation of the anti-monopoly legislation in 2009 [6]. In addition, Rosneft was sanctioned by the EU in 2014 [7]. The Russian oil behemoth has, therefore, repeatedly proven itself to be a particularly risky investment, which makes one wonder why BP did not react sooner.

During the past few years, Shell, BP’s major competitor, did not miss an opportunity to form multiple partnerships in Russia. It has a 27.5% interest in the Sakhalin-2 oil and gas project operated by Gazprom, which has a liquified natural gas capacity of more than 11 million tons [8]. It is also one of five companies that financed 50% of Gazprom’s Nord Stream 2 gas pipeline to Europe [9]. In an announcement made on 28 February, Shell declares itself ready to exit these partnerships, as well as its “50 percent stake in the Salym Petroleum Development and the Gydan energy venture”[10]. However, the oil giant did not immediately appear to be taking its commitments seriously, as Shell reportedly purchased 100,000 metric tons of Russian crude oil at a very low price a few days later, a move that was subject to heavy criticism and subsequently led to a public apology [11].

ExxonMobil’s subsidiary, Exxon Neftegas, is also openly planning to pull out of the Sakhalin-1 oil and gas project which it operates with a 30% stake, although without having disclosed a clear timeline for the exit, pointing out that “the process to discontinue operations will need to be carefully managed” [12]. The value of ExxonMobil’s assets in Russia, which the company is planning to abandon, is estimated at over USD 4 billion [13]. Less clear is what is happening with ExxonMobil’s affiliate Mobil Caspian Pipeline Company; a 7,5% shareholder in the Caspian Pipeline Consortium, a project owned in its majority by the Russian Federation and about whom as yet no exit from Russia has been announced.[14].

Equally noteworthy is the announcement of Equinor, an energy company owned by the state of Norway [15] that has been active in Russia for decades, that it will exit its Russian partnerships. This  includes its 30% stake in the Kharyaga oil field, its 33.33% share in a joint venture created for the exploitation of the North-Komsomolskoye oil field operated by the already controversial Rosneft, as well as its 49% interest in AngaraOil LLC, also a joint project with Rosneft in Eastern Siberia [16].

Nevertheless, this response of the western oil and gas industry to Russia’s aggression has not been a unanimous one, as oil and gas multinationals with presumably “too much to lose” refuse to end their operations in the country. Such examples are Total Energies SE (Total) and Chevron Corp. (Cevron).

TotalEnergies SE ranks fifth among the biggest oil companies worldwide, with an annual revenue of nearly USD 190 billion [17] and is one of the companies that did not follow the lead of other oil majors. Total reacted to the attacks on Ukraine with a lukewarm and highly questionable exclusion of Russia from new projects [18], omitting to make any commitments regarding its existing activities in the country, which are indeed far from negligible. More specifically, Total is a 19.4% shareholder in Novatek [19], one of the largest liquified natural gas producers in Russia [20], together with which they also form the Terneftegaz joint venture. But that is not all. Total’s interests in the Russian Arctic are rather extensive, as it additionally sponsors the Yamal LNG project next to Novatek and CNPC, with a 20% stake [21] and participates in the joint venture Arctic LNG 2 (10%), a project planning to exploit the gas reserves of the Utrenneye field, north of the Gydan peninsula [22].

“Chevron does not have exploration or production activities in Russia” writes Chevron on its webpage, in a message meant to express support for the horrors unfolding in Ukraine [23], while, according to its CEO Michael Wirth, the company has “very little exposure to Russia” [24]. However, Chevron is one of the biggest investors in the Russian oil and gas sector, having a 15% stake in the Russian Government majority-owned Caspian Pipeline Consortium [25]. The project aims to transport crude oil from Kazakhstan through Russia to the Novorossiysk-2 Marine Terminal at the Black Sea, a key location for Chevron’s crude oil exports [26]. It is important to note that Chevron ranks seventh among world’s biggest oil firms with an annual revenue that exceeds USD 150 billion and a wide range of upstream as well as downstream operations [27].

Many financial institutions assessed by the Fair Finance Guide (FFG) are among the investors and financiers of the aforementioned oil and gas majors, including Total and Chevron, who did not follow their peers’ example and chose to continue their operations in Russia, despite the human rights and economic risks involved.

For these two laggards, Facing Finance has examined their financial relationships with FFG financial institutions in more detail. In 2021, Deutsche Bank via DWS invested more than EUR 1,4 billion in Total’s bonds and shares, and nearly EUR 650 million in Chevron’s. Deutsche Bank itself holds shares and bonds of Total (almost EUR 54 million) and Chevron (around EUR 126 million) and has underwritten bonds for both companies worth more than EUR 1 billion. This makes Deutsche Bank the FFG financial institution with the biggest potential for influence on the decisions of Total and Chevron. In 2020, the amount of loans UniCredit, HypoVereinsbank’s parent company, granted to Total corresponded to approx. EUR 330 million, ranking it among its biggest financiers. At the same time, UniCredit has underwritten almost EUR 34 millions of Chevron’s debt. DZ Bank holds, through Union Investment, shares in Chevron and Total, that amount to approx. EUR 625 million and EUR 540 million respectively. Allianz is just as heavily invested in Total (around EUR 454 million) and less in Chevron (approx. EUR 103 million), also through Pimco (Total: EUR 61,5 million; Cheron: EUR 142 million). The Deka Group has share- and bondholdings in Total that amount to just under EUR 350 million, while the Dutch bank ING holds EUR 63 millions in Chevron’s shares. Finally, Axa’s participations in both companies exceed EUR 100 million. Other FFG financial institutions like Commerzbank, LBBW, BayernLB, apobank and Stadtsparkasse Düsseldorf also have interests in one or both of these firms, although of much smaller volume [28]. 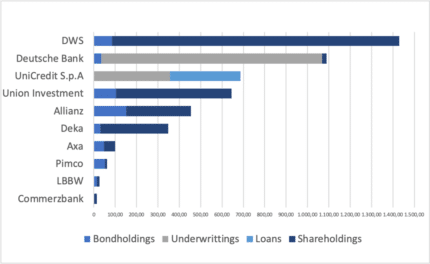 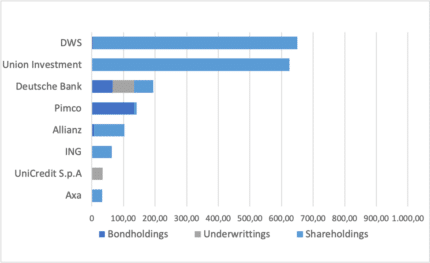 We call on the major financial supporters of Total and Chevron, more specifically Deutsche Bank, UniCredit, DZ Bank, Allianz, Deka and ING to engage with these companies and use their influence to convince them to divest their interests in Russia. As lenders of and shareholders in these corporations, they are indirectly responsible for their decision to continue fueling the Russian oil and gas industry. We further ask these financial institutions to use their power, at shareholder meetings as well as during bilateral negotiations, to exercise pressure on companies such as Total and Chevron and give them strong incentives to respond better to Russia’s war on Ukraine, thus ensuring that the insatiable western energy needs are not being satisfied at the expense of innocent lives.

Indeed, more than enough harm has been caused so far as a result of West’s reliance on Russian oil and gas, which has been strengthening the Russian economy for decades. For Germany alone, its imports of natural gas from Russia in 2021 amounted to 142 billion cubic meters, which translates into 32% of its entire supply [29]. German banks and investors have been continuously injecting capital, either directly or indirectly, into Russia’s petroleum industry, an industry exhibiting adverse environmental impacts, high risks and significant volatility. With many claiming that dropping out of Russian oil and gas reserves now would significantly increase market volatility and have dire consequences for the global economy, it is important to recognize that this vulnerability stems primarily from the failure of western societies to change their consumption patterns and prioritize sustainability and energy independence. But these are mistakes that the West can learn from. When it comes to the role of financial institutions, it is high time they take their responsibility seriously and shift much needed capital towards the long overdue transition from fossil fuels to renewable energy sources.