Swedish banks must vote for H&M to pay unpaid salaries

Thousands of seamstresses in factories that sew clothes for H and M have not received their wages earned during the pandemic. Swedish banks are now being asked to vote in favour of a shareholder proposal at H and M's AGM, which states that the company should pay the outstanding unpaid salaries.

Encourage your bank to vote for the seamstresses via Fair Finance Sweden's page! 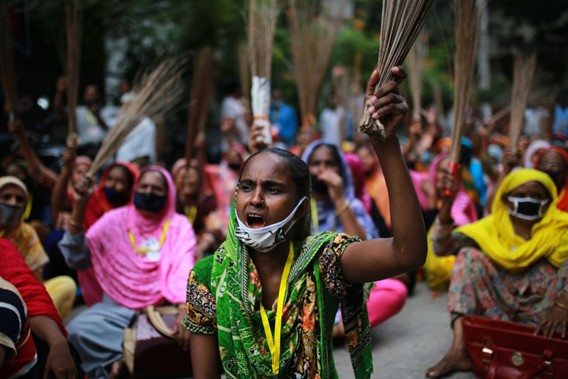 The pandemic has hit factory employees in the textile industry hard, where many have not received their statutory salaries and severance pay. During the pandemic's first thirteen months, the total amount of due salaries was estimated at just over SEK 100 billion, according to the Clean Clothes Campaign. Two years after the pandemic, most textile workers have still not been paid. For example, 2,000 employees at the H&M supplier Gladpeer Garments in Cambodia are waiting to receive more than SEK 13 million in severance pay.

"Workers in Cambodia, Bangladesh and several other of H&M's central production countries are now testifying that they are forced to go hungry or get into debt in order to buy food for their families. H&M must take its responsibility so that those who sew the garments are not left in the lurch", says Charlie Aronsson, Project Manager at Fair Action .

The shareholder proposal presented by Fair Action calls on H&M to guarantee the rights of factory workers by negotiating a legally binding agreement with trade unions. The agreement shall ensure that all workers in the supply chain shall receive compensation for outstanding salaries and statutory severance pay. The agreement also includes a guarantee fund that will protect workers from being left without compensation when factories are forced to close in the future. An agreement proposal has already been drawn up by close to 40 unions.

Major Swedish banks have the power to influence H&M

The seven largest banks in Sweden are some of H&M's largest shareholders with a total holding of close to SEK 22 billion. When,  earlier this year, Fair Action and Fair Finance Sweden examined how Swedish banks take responsibility as owners of H&M, five out of seven banks were critical of H&M's work to ensure reasonable wage levels at the supplier factories.

"'By voting in favour of the proposal, the banks would send a strong signal to H&M that they are serious when they demand improvements in H&M's policies regarding decent wages and working conditions', says Charlie Aronsson of Fair Action.

Photo: Rehman Asad / Barcroft Medi. Seamstresses in Bangladesh protest that they have not received their salaries (not related to H&M).